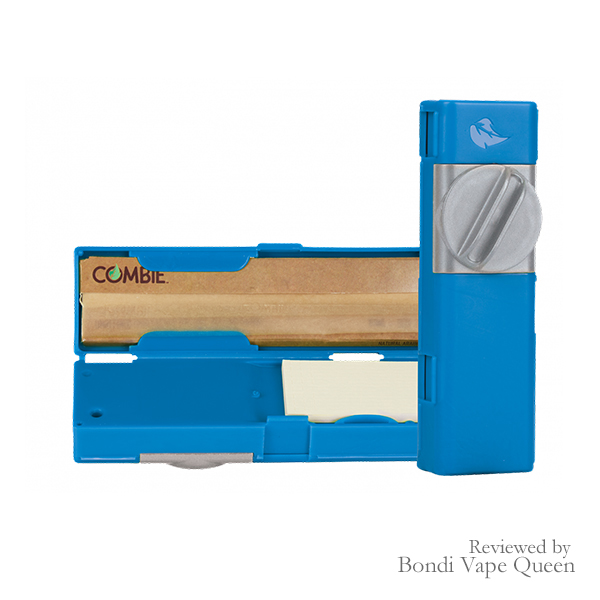 I wish something like the Combie had been around years ago before I exclusively became a vaper. I used to take rolling to quite the art form with an extensive array of paraphernalia. Great for at home but a slight pain when out and about. Combie is basically a revolutionary 6-in-1 grinder system. This is the second iteration of Combie that I sell, this being the all new Aluminium Grinder version made of aircraft-grade aluminium with N52 neodymium magnets. Same functionality just now enhanced with an aluminium grinder portion.

Out and about usage is where the Combie really shines, a revolutionary new device that combines all your essential rolling tools, including storage, into one handy easy to carry device. Did I mention there is even a grinder included? A built-in magnetic aluminium grinder at that. This new grinder is made out of a solid 7075 aluminium bar. The same material used in the aircraft industry, which makes it even more durable, sharp, and effective than the original. The magnetic seal has also been tweaked and the lid of the grinder is now held in place with larger N52 neodymium magnets. Couldn’t tell you what they are but I can attest o their strength! A small pick tool (also aluminium) is also included to help clean the grinder (located in storage compartment).

TIP: The cap of the grinder has a 6 mm raise and serves well as a handle. Diameter: 31 mm

Along either side of your grinder are 2 storage zones (one way bigger than the other), use them as you wish but the larger area connects directly to the base of the grinder and most see this as the “mixing bowl”.  Flip over the Combie and pull open to find your “workspace”, a compartment that has been specially designed for you to easily draw out rolling papers and filters. The Combie comes complete with Combie’s exclusive King sized, organic rolling papers and filter tips. And most importantly when they run out you can easily insert a fresh packet (King size fits best but smaller will still work).

I’m guessing the people at Combie have been rolling for a while now as they really have thought of everything you would need. I am impressed!